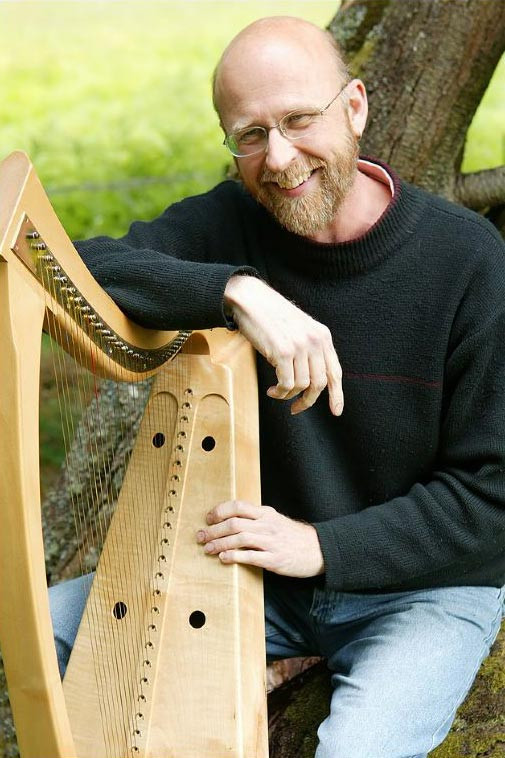 For many years I have been exploring the ancient music of England, Ireland, Scotland and Wales, playing historical harps with gut, horsehair and wire strings. I have lately been involved in projects with lyres and psalteries. It has been fascinating to see how using historical damping techniques with fingernails, such as we find in the Robert ap Huw manuscript and in Bunting's collections, has become such a large part of how I approach playing all early harps.

I am very interested in medieval Welsh harp music, found in the Robert ap Huw manuscript. I find the music mystical and other-worldly. The damping techniques which are presented for playing the pieces are quite straight-forward and are essential for playing with clarity and detail. I teach using the original tablature, and it is not difficult to interpret the notation, given proper instruction.

I have had considerable experience accompanying medieval songs over the years, and I am particularly interested in making instrumental intabulations of plainsongs, especially the beautiful melodies we find in the sources for the feast days of the Celtic saints Columba, Kentigern, Patrick and Bridget. Also amongst the sacred repertoire which I enjoy playing is polyphony from the 13th-century St Andrews Music Book. These are surely pieces intended for virtuosic singers, which transfer brilliantly to the sparkle of wire strings.

Might anyone be interested in exploring psaltery? It’s a lovely instrument which deserves to be heard more, and to be played properly, with the same close attention to damping details which we would expect with harp music. One small challenge is that the strings are found in the reverse order, with the longest lengths closest to the player and the shortest lengths furthest away!

I have several lyres, strung with both wire and gut. I approach playing these equally, with different techniques gleaned from harp sources, which I use for playing tunes and songs from different cultures.